In his political memoir, Carl Scully brings a confronting perspective to the challenges and obstacles an aspiring politician experiences daily to achieve political success — from the process of winning pre-selection, to campaigning for election, and once elected to retaining ministerial longevity, all while delivering significant road and rail infrastructure for the community.

In this first hand account of how the 10-year Carr government conducted its business, Carl recalls amusing anecdotes of events that occured while he was in government, and tells what really happened behind the scenes when Morris Iemma succeeded Bob Carr as Premier, and how on a whim Iemma brought Carl’s career to an end over the Cronulla Riot Report. This political memoir is his opportunity to set the record straight.

Much was achieved during Carl Scully’s nearly 12 years as a NSW minister: five motorways (M7, Eastern Distributor, Lane Cove Tunnel, M5 East, Cross City Tunnel), the extensive Western Sydney bus only Transitway network, the Epping to Chatswood Rail Link, as well as the planning and delivering of transport for the Sydney 2000 Olympics − all lasting legacies for the people he served.

In March 2007, he left politics behind and worked as a consultant and in an international business development role with global engineering firm WorleyParsons, until his retirement from full time employment in November 2015.

Carl Scully currently chairs the NSW Mine Safety Advisory Council, runs his own project advisory business and continues to pursue his interest in history as a part time student at the University of Sydney.

Be the first to review Setting the Record Straight. 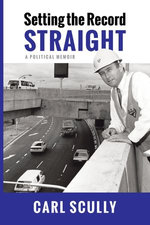