WHAT IF FOLLOWING HER HEART MEANS ROSE COULD LOSE HER BEST FRIEND FOREVER?

Rose Hathaway knows it is forbidden to love another guardian. Her best friend, Lissa – the last Dragomir princess – must always come first. Unfortunately, when it comes to gorgeous Dimitri Belikov, some rules are meant to be broken . . .

But since making her first Strigoi kills, Rose hasn't been feeling right. Something dark has begun to grow in her mind, and ghostly shadows warn of a terrible evil drawing nearer to the Academy's iron gates. And now that Lissa and Rose's sworn enemy, Victor Dashkov, is on trial for his freedom, tensions in the Moroi world are higher than ever.

Lying to Lissa about Dimitri is one thing, but suddenly there's way more than friendship at stake. The immortal undead are on the prowl, and they want vengeance for the lives that Rose has stolen. In a heart-stopping battle to rival her worst nightmares, Rose will have to choose between life, love, and the two people who matter most . . . but will her choice mean that only one can survive?

REVIEWS FOR THE VAMPIRE ACADEMY SERIES

'Mead . . . weave[s] a unique and mesmerizing mystery with a whodunit ending that even the most skilled detectives will not predict . . . this little gem is sure to be a hit.' VOYA

'Teens able to handle the edgy elements will speed through this vamp story and anticipate the next installment.' Booklist

'In a world that seems saturated with vampire books, Richelle Mead has created characters and a world that is both unique and believable.' TeensReadToo.com

Be the first to review Shadow Kiss: Vampire Academy Volume 3. 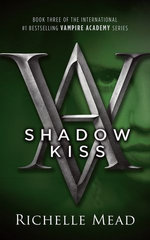