by Catherine Mann, Emily Forbes,  Tawny Weber and others

The Far Side Of Paradise – Robyn Donald

Instead of the heartless seductress Cade Peredur expected, Taryn's eyes reveal a mysterious innocence. Determined to gain her trust, Cade sweeps her to the tropical island of Fala'isi — which begin their passionate steamy nights! Wary of men after a horrible engagement, Cade stirs Taryn, but when Cade's identity is revealed, will Taryn's fantasy disappear in the Pacific tides?

Hillary Wright latest man troubles left her in trouble with the law, and to clear her name, she's agreed to go undercover — as the “date” for infamous hacker Troy Donavan. Troy has a reputation and his secretiveness makes him the sort of man she's vowed to avoid. But with his kisses like molten sin, her fierce resistance is melting…

Nurse Eva Henderson had come to the beautiful Pelican Beach — but on meeting her gorgeous new boss, Dr Zac Carlisle, staying put suddenly seems very tempting. Everyone can see what Zac can't — this bright nurse is perfect for him! But will the community be enough for Zac to follow his heart — and take Evie as his bride?

All workaholic Drucilla Robichoux wants is incredible sex. So she goes to Mexico for some sun and finds sexy surf instructor Alex — teaching Dru to ride the waves...right into the best climaxes! When Dru's vacation is over, it's a shock walking into work to find Alex is her new boss! 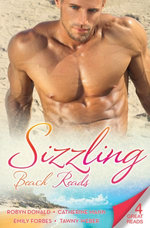 by Catherine Mann, Emily Forbes,  Tawny Weber and others