Jesse Lawson was never afraid of the strange and unusual dreams he had. But lately, they were becoming darker leaving him with a need to discover why he was having them. He believed he would find answers at the site of logging camps in The Great Smoky Mountains. His great grandfather had lived and died there, and Jesse was sure it was Jackson Douglas haunting him.

Carter Thompson never knew his great great uncle George Thompson, but he inherited his land, home, and money. George had come here to America to find work in the lumber camps. Meeting Jesse Lawson was about to turn his world upside down. Jesse's dreams somehow involved Carter, and the more they searched the closer they became.

George left journals that could clear up many mysteries, including Jackson Douglas's death. Now it seemed that something was trying to destroy Carter and Jesse's growing attraction to each other. Whoever it is will stop at nothing to keep them apart, even if they have to repeat the past to do it.

Be the first to review Smoky Mist. 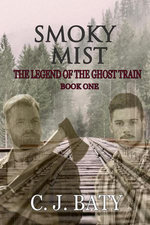