by Vivian French and Marta Kissi

A stand-alone comic adventure for younger readers by sublime storyteller Vivian French, with pictures by Marta Kissi, a talented new illustrator and animator.

From Vivian French, the bestselling author of the Tiara Club series and The Adventures of Alfie Onion, comes a charming new comic fairy tale for junior readers. It's not much fun being a princess: you have to be prim, proper and obedient. Princess Peony lives in a world full of magical creatures – hags, trolls, giants and fairy godmothers – but her father's strict rules leave her feeling bored and lonely. She wants to learn how to DO things, and cooking's at the top of her list. But when Peony borrows a recipe book from the public library, the king has the old librarian who tried to help her arrested for "speaking out of turn". Can Peony stand up to her father and make things right? A funny and uplifting story, brought to life by Marta Kissi's warm and expressive illustrations.

Vivian French is a highly acclaimed children's author who has written more than 250 books during the course of her career, including Caterpillar, Butterfly, The Tales from the Five Kingdoms series and Yucky Worms.

Her recent work includes the critically acclaimed picture book The Most Wonderful Thing in the World and junior fiction The Adventures of Alfie Onion, The Cherry Pie Princess and The Witches' Midnight Feast.

Vivian teaches on the illustration course at Edinburgh School of Art, and helped to found the mentoring scheme Picture Hooks for aspiring young illustrators. She lives in Edinburgh

Marta Kissi is a London based illustrator who was born in Warsaw. She studied BA Illustration & Animation at Kingston University and MA Communication Art & Design at the Royal College of Art.

Be the first to review The Cherry Pie Princess. 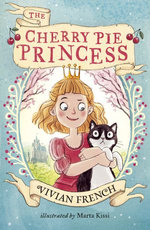 by Vivian French and Marta Kissi