The Directors: The Playboy Interview

by Spike Lee, Federico Fellini,  James Cameron and others

The filmmakers who defy convention and validate the legitimacy of the auteur theory are revealed in probing, wide-ranging and provocative interviews that first appeared in Playboy magazine. From foreign masters of direction and style Ingmar Bergman and Federico Fellini to champions of independent film Spike Lee and The Coen Brothers to the godfathers of the gangster movie Francis Ford Coppola and Martin Scorsese, the visionaries to constantly push the boundaries of their medium and portray humanity through subversive lenses reflect the very best of the 50 years of the Playboy Interview.

Martin Scorsese (Director/Producer/Screenwriter) is an Academy Award-winning Director and one of the most influential filmmakers working today.

He has directed critically acclaimed, award-winning films including Mean Streets, Taxi Driver, Goodfellas, The Departed, The Wolf of Wall Street, and many more. Scorsese is the founder and chair of The Film Foundation, a non-profit organisation dedicated to the preservation and protection of motion picture history. 2016 saw the release of Scorsese's passion project, Silence, based on the acclaimed novel by Shusaku Endo.

Scorsese has directed numerous documentaries including the Peabody Award winning No Direction Home: Bob Dylan, Elia Kazan: A Letter to Elia, and George Harrison: Living in the Material World, for which Scorsese received Emmy Awards for Outstanding Directing for Nonfiction Programming and Outstanding Nonfiction Special.

In 2019, Netflix released Rolling Thunder Revue: A Bob Dylan Story by Martin Scorsese, the director's second film about Dylan, this one focusing on his legendary 1975 tour. The Irishman is Scorsese's 25th feature film.

Be the first to review The Directors: The Playboy Interview. 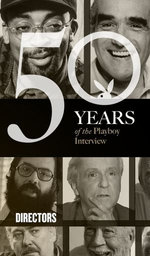 The Directors: The Playboy Interview

by Spike Lee, Federico Fellini,  James Cameron and others