In New York City's 'work hard, play harder' singles scene, a young woman looking for love can find herself the object of a deadly obsession...

With each meaningless date and disappointing new boyfriend, Katie Porter is becoming more and more disillusioned. No matter how wide a net she casts, she can't seem to find a guy who really understands her.

But there is one person who thinks she's special - very special. And he's following her. He sees Katie at the gym. He sees her at the coffee bar she stops at on the way to work. In fact, he sees her almost anywhere, as he quietly follows her. Most of all, he sees her in his plans for the future. Surely he can't let anything stand in his way. . .

Be the first to review The Follower. 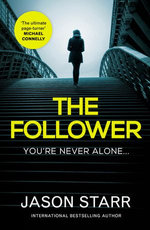