"I LOVED The Intuitives! I want more. I NEED more." - Teacher of YA Book Blog

In Egypt, an archaeological team discovers the lost tomb of Alexander the Great. Seven years later, every public school student in America takes a strange new test, but only six are chosen to attend a summer program at the mysterious Institute for the Cultivation of Intuitive Cognition, where nothing is as it appears to be, including the students themselves.

Sees things. Around people. Things he can never, ever tell.

Isolated by a premonition even she doesn’t understand.

Hides his private thoughts in the soundtrack of his mind.

Can fix anything, except the one thing that matters most.

Armors her deepest fears against a world she can’t control.

Hoping to turn pro, and a constant disappointment to his father.

But why is the U.S. government so interested in six outcasts? And what, exactly, is it teaching them to do? Now, they must band together to uncover the true purpose behind the institute—and the ancient secrets that lie hidden beneath its surface ...

BEFORE HISTORY CATCHES UP TO THEM.

"This book was so refreshing! It was so unique and diverse, and I adored the characters. ... I have to applaud Erin and Steven for their wicked writing skills!" - The Lovely Shelf Book Blog

Recommended for fans of Stranger Things and Ready Player One.

Also by the authors: Tales of the Wendy

Be the first to review The Intuitives. 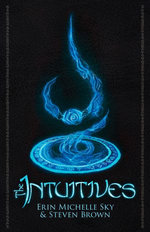