The (Not Quite) Perfect Boyfriend (Girlfriend Fiction 5)

'I did meet a Boy,' Midge snaps. 'He has wavy brown hair, and he's English. I met him at the Library. We had romantic picnics by the river and we kissed. A lot.'

Midge has never had a boyfriend - so she makes one up. Then she is paired for the Major Project with George, the New Boy, who doodles dragons, tucks in his shirt, has a mysterious past and an unseemly interest in secrets. Soon Midge's white lie turns into a web of deceit as she fabricates emails from her imaginary boyfriend, and even a MySpace page.

Then one day, Midge comes face-to-face with her imaginary boyfriend in the school corridor. Tall, brown wavy hair, English accent - he's exactly as she'd described him - right down to his name. Ben catches on quickly and rescues her from certain humiliation - kissing her in front of all her friends. He seems the answer to her prayers. A dream come true. The Perfect Boyfriend! But he turns out to be not quite perfect after all, and before long Midge finds herself in all sorts of trouble.

Lili Wilkinson is the award-winning author of eleven YA novels including The Boundless Sublime, Green Valentine, Pink and Scatterheart.

After studying Creative Arts at the University of Melbourne, Lili established the insideadog.com.au website, the Inky Awards and the Inkys Creative Reading Prize at the Centre for Youth Literature, State Library of Victoria.

She has a PhD in Creative Writing, and lives in Melbourne with her husband, son, dog and three chickens.

Be the first to review The (Not Quite) Perfect Boyfriend (Girlfriend Fiction 5). 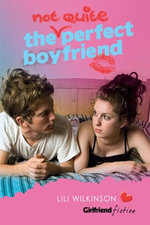 The (Not Quite) Perfect Boyfriend (Girlfriend Fiction 5)