This 1816 story is perhaps best known as the basis for Tchaikovsky's popular ballet, but Hoffmann's holiday legend is where the spell begins. Here is the original tale of seven-year-old Marie and her beloved Nutcracker, beset by a dark mystery that surrounds this story within a story.

Godpapa Drosselmeier, who once served as the royal court's inventor, recounts to Marie a tale of the trickery of Dame Mouserink, the Queen of Mice. The vengeful queen casts a curse on an innocent princess, forcing Drosselmeier to undertake an arduous quest to break the spell. His mixed success leads to the lasting enmity between the Nutcracker and seven-headed Mouse-King — Dame Mouserink's son — a conflict that only Marie can help resolve.

One of the world's greatest fantasy writers and a major figure in late German Romanticism, Ernst Theodor Amadeus Hoffmann (1776–1822) created extraordinary works of poetry and supernatural fiction. In tales like The Nutcracker, Hoffmann's characters come to vivid life in settings that move from the firm ground of reality to a world of enchantment, mystery, and romance.

Be the first to review The Nutcracker. 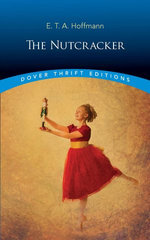 Classic fiction Myth & legend told as fiction Fiction
Hold on while we process your request.