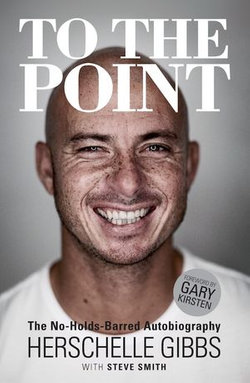 There’s something about Herschelle Gibbs - a certain quality that has endeared him to cricket fans in South Africa and around the world. Despite the frustrating on-field inconsistencies of this towering talent, and the messy and very public personal troubles that have tracked him through the years, Herschelle remains one of South African cricket’s best-loved sons In To the Point, Herschelle talks very frankly about the ups and downs of his personal and professional life. He covers the big cricketing moments - from that dropped catch at the 1999 World Cup to the famous ‘438’ game against Australia and the six sixes at the 2007 World Cup - as well as controversies off the field - the marijuana-smoking incident in the Caribbean, his problems with alcohol and his stint in rehab, his divorce, the multitude of women and the strip-club video. He also deals honestly with the match-fixing controversies … and their repercussions. Herschelle gives his opinions on his teammates and the best players he has encountered over the years, and describes what it’s been like to be part of the Proteas set-up for the past fourteen years, through the controversies of its various captains and coaches. To the Point is, of course, a spicy story of excess - women, alcohol, money … and plenty of runs – but underlying it all is a warm and generous man who wears his heart on his sleeve.

Be the first to review To the Point.

by Steve Smith and Herschelle Gibbs