Treasure in the Library

Hired to create an electronic catalog of a long-neglected Royal Library, a rookie archivist struggles to protect her project—and her heart—from the accidental Crown Prince, the man who both wants her gone, and wants her forever.

What if a smart young professional woman, facing her first solo assignment, finds herself working for a man who wants to shut down her project: the same man she fell for years ago?

Rookie archivist Dr. Emily Charette strives to live up to her historian father’s reputation. Offered the chance to catalog the Royal Library of Dubrovia, Emily is torn between caring for her ailing father in Canada and accepting an assignment far from home to prove she’s his worthy successor.

She’s working for Nikolas Kuliç, formerly the playboy younger cousin (and the object of her unrequited affection more than a decade ago) but now the Crown Prince of Dubrovia. And he wants to shut down her project to recover the funding for his winery and a tourist-magnet spa.

Emily has to protect her project as well as her heart—because she’s falling in love with Nik all over again. It’s not professional,  it’s not smart—and for someone who prides herself on being both, it’s a disaster.

Be the first to review Treasure in the Library. 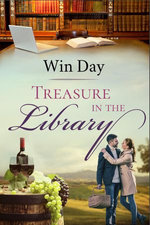 Treasure in the Library