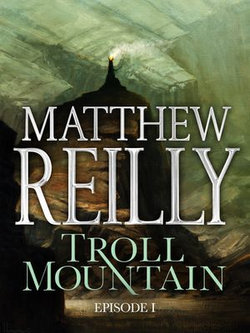 From Australia's favourite novelist, author of the Scarecrow series and the Jack West Jr series with new novel The Two Lost Mountains out now.

An army of brutal monsters.

Journey to the mountain ...*

In an isolated valley, a small tribe of humans is dying from a terrible illness.

There are rumors, however, that the trolls of Troll Mountain, the valley's fearsome overlords, have found a cure for the illness: a fabulous elixir.

When his sister is struck down by the disease and his tribal leaders refuse to help him, an intrepid youth named Raf decides to defy his tribe and do the unthinkable: he will journey alone to Troll Mountain and steal the elixir from the dreaded trolls.

But to get to Troll Mountain, Raf will have to pass through dangerous swamps and haunting forests filled with wolves, hobgoblins and, worst of all, the ever-present danger of rogue trolls ...

The journey to the mountain has begun.

IN THIS, THE FIRST OF THREE SERIALIZED EPISODES, MATTHEW REILLY TAKES YOU ON HIS WILDEST RIDE YET: A HEADLONG QUEST TO THE DARK HEART OF THE KINGDOM OF THE TROLLS. Be the first to review Troll Mountain: Episode I.