From Australia's favourite novelist, author of the Scarecrow series and the Jack West Jr series with new novel The Three Secret Cities out now.

An army of brutal monsters.

Journey to the mountain ...

The only unguarded entrance to Troll Mountain is the abandoned kingdom of the hobgoblins.

With no other route available to them, Raf and his newfound friends, Ko and Düm, enter the dark, dank world of the hobgoblins.

But is it truly abandoned?

IN THIS, THE SECOND OF THREE SERIALIZED EPISODES, MATTHEW REILLY TAKES YOU ON HIS WILDEST RIDE YET: A HEADLONG QUEST TO THE DARK HEART OF THE KINGDOM OF THE TROLLS.

Be the first to review Troll Mountain: Episode II. 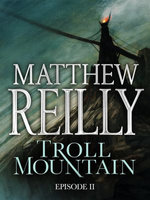