How did Lev Calder move from an unwillingly escaped Tithe to a clapper? In this new ebook original short story, author Neal Shusterman opens a window on Lev's adventures between the time he left CyFi and when he showed up at the Graveyard.

Lev's experiences on a Hi-Rez, an extraordinarily wealthy Native American Reservation introduce him to a teen with remarkable musical talent... and whose gifts are destined to end up in the hands of another. And it is this teen's heart-breaking story that inspired Lev to choose the clapper's path.

Pulling elements from Neal Shusterman's critically acclaimed Unwindand giving hints about what is to come in the long-awaited sequel, UnWholly, this short story is a must for fans of the series.

"Gripping, brilliantly imagined futuristic thriller… The issues raised could not be more provocative - the sanctity of life, the meaning of being human - while the delivery could hardly be more engrossing or better aimed to teens." Publishers Weekly, starred review

"This is the kind of rare book that makes the hairs on your neck rise up. It is written with a sense of drama that should get it instantly snapped up for film." The Times

Be the first to review UnStrung. 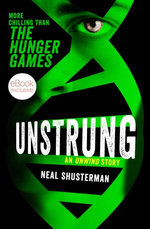