by Richelle Mead and Michelle Rowen

Lissa Dragomir is a Moroi princess: a mortal vampire with a rare gift for harnessing the earth's magic.� Her best friend Rose Hathaway is a dhampir: a guardian whose blood is a powerful blend of vampire and human.� Rose's life id dedicated to protecting Lissa from the dangerous Strigoi-the fiercest vampires, who will stop at nothing to make Lissa one of them.� Over the course of six books, love will blossom, hearts will be broken, and lives will be lost.� But through it all, Rose and Lissa's friendship will never surrender . . .

THE OFFICIAL ULTIMATE GUIDE IS THE MUST-HAVE ADDITION TO ANY VAMPIRE ACADEMY COLLECTION.

Learn everything you ever wanted to know about the totally addictive world Richelle Mead has created Find out the real history of St. Vladimir's Academy Explore the dark psychology behind Rose and Lissa's unusual friendship Discover even more illicit secrets about Rose and Dimitri Quiz yourself to find out how much you really know about VAMPIRE ACADEMY Features exclusive behind-the-scenes stories from author Richelle Mead along with everything readers need to go even deeper into the characters and lore of Vampire Academy, Frostbite, Shadow Kiss, Blood Promise, Spirit Bound, and Last Sacrifice . . .

Be the first to review Vampire Academy. 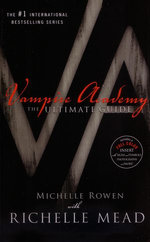 by Richelle Mead and Michelle Rowen

Fiction Fantasy Vampire Academy and Bloodlines series
Hold on while we process your request.