Love, served with a twist.

Nursing a broken heart when his ex-boyfriend, Riley, leaves him for the love of his life, Carter, Will Martin throws himself into teaching at NYU and writing. An invite from Riley to a speakeasy called Under helps Will begin to heal, and he finds himself enjoying both the drinks and the company.

Soon after, he’s shaken by news of his father’s cancer diagnosis and Will reluctantly returns to Long Island to see the man who disowned him after he was outed.

Sparks fly when Will meets his father’s mentee, Republican Senator David Mori, who is both mixed race and openly gay. Will is looking for a no-strings-attached fling and David is leery of getting involved with his mentor’s son, so they keep their affair a secret.

As his father’s health worsens, Will elects to remain in Garden City and his relationship with David grows beyond casual sex. Now, both men must decide how to bridge the divide between them.

Be the first to review With a Twist. 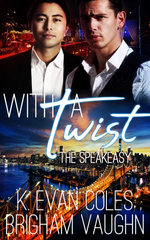