Working for Justice, which includes eleven case studies of recent low-wage worker organizing campaigns in Los Angeles, makes the case for a distinctive "L.A. Model" of union and worker center organizing. Networks linking advocates in worker centers and labor unions facilitate mutual learning and synergy and have generated a shared repertoire of economic justice strategies. The organized labor movement in Los Angeles has weathered the effects of deindustrialization and deregulation better than unions in other parts of the United States, and this has helped to anchor the city's wider low-wage worker movement. Los Angeles is also home to the nation's highest concentration of undocumented immigrants, making it especially fertile territory for low-wage worker organizing.

The case studies in Working for Justice are all based on original field research on organizing campaigns among L.A. day laborers, garment workers, car wash workers, security officers, janitors, taxi drivers, hotel workers as well as the efforts of ethnically focused worker centers and immigrant rights organizations. The authors interviewed key organizers, gained access to primary documents, and conducted participant observation. Working for Justice is a valuable resource for sociologists and other scholars in the interdisciplinary field of labor studies, as well as for advocates and policymakers.

Be the first to review Working for Justice. 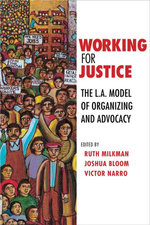 Industrial relations Trade unions Labour economics
Hold on while we process your request.