Two books in one.

Yesterday: The future’s fast collapsing. In the United North America (U.N.A) of 2063 sixteen-year-old Freya’s losing her brother to a plague that threatens to bury a world already crippled by nightmarish climate change, terrorism, mass global migration and severe unemployment. But when Freya wakes up seventy-eight years earlier – the dystopian future entirely swept from her mind – her life is one of high school cliques and crushes, new wave music and television repeats. Until she meets a boy (Garren) she’s sure she knows yet has never met. Suddenly nothing about her life feels right. Soon Freya and Garren are on the run from people they believed they could trust, struggling to uncover the truth about their lives and fighting for their very survival.

Tomorrow: The sci-fi adventure that began with Yesterday continues with an eco-thriller where no one is safe. The future's reach is long.

"Sci-fi thrillers are hot right now, and Yesterday does not disappoint...patient readers will be rewarded and will clamor for a sequel." — School Library Journal, Starred Review

"Martin weaves a wonderfully dystopian tale of deception, betrayal, and heartache as she takes her readers on a journey through the past and the future, at once showing them the destruction of a nation and the rebuilding of a species... Bringing together elements of political intrigue, ecological disaster, romance, thrilling chases, and time bending, Martin has crafted a truly wondrous and unique fictional tale. Highly recommended." — CM Magazine: Canadian Review of Materials,

"A vivid infusion of 1980s culture gives this near-future dystopia an offbeat, Philip K. Dick aura...The cultural homage is nostalgic fun, from Care Bears to MacGyver. But for delivering that uniquely ’80s flavor, nothing beats music. Fans of the Smiths, Depeche Mode, Scritti Politti—this one’s for you." — Kirkus Reviews

Be the first to review Yesterday & Tomorrow: Yesterday Books 1 and 2. 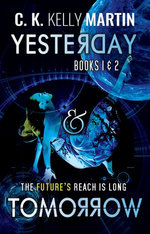