THEN: The formation of the UNA, the high threat of eco-terrorism, the mammoth rates of unemployment and subsequent escape into a world of virtual reality are things any student can read about in their 21st century textbooks and part of the normal background noise to Freya Kallas's life. Until that world starts to crumble.

NOW: It's 1985. Freya Kallas has just moved across the world and into a new life. On the outside, she fits in at her new high school, but Freya feels nothing but removed. Her mother blames it on the grief over her father's death, but how does that explain the headaches and why do her memories feel so foggy? When Freya lays eyes on Garren Lowe, she can't get him out of her head. She's sure that she knows him, despite his insistence that they've never met. As Freya follows her instincts and pushes towards hidden truths, the two of them unveil a strange and dangerous world where their days may be numbered. Unsure who to trust, Freya and Garren go on the run from powerful forces determined to tear them apart and keep them from discovering the truth about their shared pasts (and futures), her visions, and the time and place they really came from.

"A vivid infusion of 1980s culture gives this near-future dystopia an offbeat, Philip K. Dick aura...The cultural homage is nostalgic fun, from Care Bears to MacGyver. But for delivering that uniquely '80s flavor, nothing beats music. Fans of the Smiths, Depeche Mode, Scritti Politti--this one's for you." - Kirkus Reviews

"Martin weaves a wonderfully dystopian tale of deception, betrayal, and heartache as she takes her readers on a journey through the past and the future, at once showing them the destruction of a nation and the rebuilding of a species... Bringing together elements of political intrigue, ecological disaster, romance, thrilling chases, and time bending, Martin has crafted a truly wondrous and unique fictional tale. Highly recommended." - CM Magazine: Canadian Review of Materials

"C.K. Kelly Martin's novel has all the makings of good speculative fiction fused with a nostalgic nod to the music scene of the 1980s. Martin writes of a bleak future that is reminiscent of Aldous Huxley's dystopian classic Brave New World..." - VOYA

"This is time travel the way I like it, no, love it...The ending is — well, perfect. One of the best final lines in a book, ever. Fingers crossed, there will be a sequel." - A Chair, A Fireplace and A Tea Cozy, School Library Journal Blog

Be the first to review Yesterday. 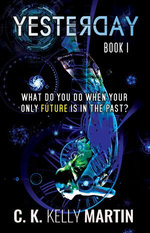