This item qualifies for FREE delivery
Season 1
Your best friend's star is rising in Hollywood, and there's only one thing to do: join his entourage. Meet Eric, Turtle and Johnny Drama: three guys from Queens dedicated to helping their film-star buddy Vincent Chase navigate the absurdities of modern-day Hollywood--where sex, parties and super-agents rule the town.
Season 2
After three months shooting an indie film in the Big Apple, the boys are back in La-la-land. Eric is officially Vince's manager, Turtle is running the house, Drama is hoping to enhance his onscreen assets...and Ari is pushing a blockbuster superhero role for his golden-boy client.
Season 3
With Vince's star expected to rise higher in the Hollywood firmament as a result of his starring role in a potential blockbuster titled Aquaman, Eric, Drama, Turtle and Ari must find a way to keep stroking their golden goose while making sound decisions for a long-lasting career in a world of fleeting fame. Sure it would be good to have it all, but at what price? For Vince, Eric, Drama and Turtle, life in Hollywood's fast lane isn't without its road bumps, as we learned when a botched deal cost Ari, Vince's longtime agent, his job. Will a change at the top make the difference in getting Vince his dream picture - or will the boys regret giving Ari the ax?
Season 4
In Season Four, in fact, Eric and Vince have taken on new roles as producers. Will their film be hailed as a critical masterpiece, or will it end up on the trash heap of broken Tinseltown dreams?

Season 5
In Season Five, can the guys put the Medellin fiasco behind them and orchestrate a career comeback for Vince?

Season 6
After hitting some speed bumps the last couple of years, Vince's career is in high gear after his role in a new Martin Scorsese film. But now that Vince is back on top, is it finally time for the entourage to step out of his shadow?
Season 7
After an accident during the filming of his latest action flick, Vince develops a new lease on life that makes him even more difficult to manage, while each of the guys must decide which steps to take to map out their own futures, both personally and professionally.
Season 8
The final eight episodes of Entourage, the Emmy Award-winning hit comedy series. Vince, Eric, Drama, and Turtle have been through a lot over the years, chasing dreams, women, and good times. Through the highs and lows their friendship has kept them together. This season, find out if the guys can compete on their own in the fast lane of high-stakes Hollywood. It's time to fasten your seat belts!

Be the first to review Entourage: The Complete Collection. 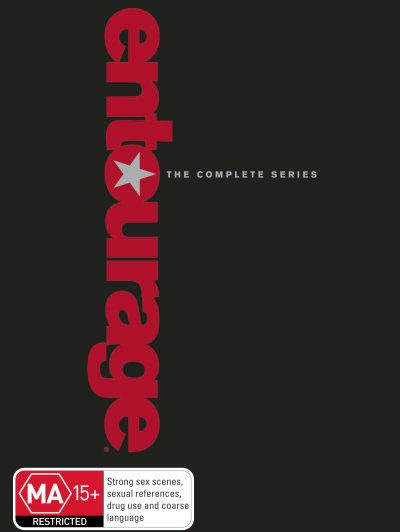