FAST AND FURIOUS: Fugitive ex-con Dom Toretto (Vin Diesel) is back in Los Angeles... to seek out the truth behind a high-profile crime, but his presence in town doesn't sit well with Agent Brian O'Conner (Paul Walker). These two rivals are forced to unite in the cause of fighting a common enemy, however, when convoy heists and precision tunnel crawls lead them out of Los Angeles and into the Mexican desert. Now, in order to take down a formidable opponent with some serious skills behind the wheel, Dom and Brian forge an uncertain partnership while exploring thrilling new frontiers in the fine art of racing.

2 FAST 2 FURIOUS: Supercharged street-racing action exploding onto the streets of Miami. Incredible cars driven to the edge. Beautiful girls and a lifestyle to die for...its 2 Fast 2 Furious. Academy Award nominated Director John Singleton brings you the nitrous-injected follow-up to The Fast and The Furious.

Brian O'Conner has lost his job after letting his friend Dom Toretto, a street-racing crime boss, escape the law. Now he's back in Miami with his old friend, Roman Pearce. He's working undercover for the cops to avoid punishment for his actions. He's helping the gorgeous Monica Fuentes track down a shady Miami businessman. And he's racing again - this time, it's for his life....

THE FAST AND THE FURIOUS: TOKYO DRIFT: Sean Boswell is an outsider who attempts to define himself as a hot-headed underdog street racer. Although racing provides a temporary escape from an unhappy home and the superficial world around him it has also made Sean unpopular with the local authorities. To avoid jail time Sean is sent to live with his gruff estranged father stationed in Tokyo. Now officially a gaijin (outsider) Sean feels even more shut out in a land of foreign customs and codes of honour. but if doesn't take long for him to find some action when a fellow American buddy Twinkie introduces him to the underground world of drift racing. Sean's simple drag racing gets replaced by a rubber-burning automotive art form - with an exhilarating balance of speeding & gliding through a heart-stopping course of hairpin turns and switchbacks. On his first time out drifting Sean unknowingly takes on D.K. the "Drift King" a local champ with ties to the Japanese crime machine Yakuza. Sean's loss comes at a high price tag when he's forced to work off the debt under the thumb of ex-pat Han. Haan soon welcomes Sean into this family of misfits and introduces him to the real principles of drifting. But when Sean falls for D.K.'s girlfriend Neela an explosive series of events is set into motion climaxing with the ultimate high stakes face off.

FAST AND FURIOUS 4: Heading back to the streets where it all began, Vin Diesel and Paul Walker rejoin Michelle Rodriguez and Jordana Brewster to blast muscle, tuner and exotic cars across Los Angeles and through the Mexican desert in this new high-octane action-thriller.

When a crime brings them back to L.A., fugitive ex-con Dom reignites is feud with agent Brian O'Conner. But as they are forced to confront a shared enemy, they find the best way to get revenge; push the limits to what's possible behind the wheel!

FAST AND FURIOUS 5: Since Brian and Mia Toretto broke Dom out of custody they've blown across many borders to elude authorities. Now backed into a corner in Rio de Janeiro, they must pull one last job in order to gain their freedom. As they assemble their elite team of top racers the unlikely allies know their only shot of getting out for good means confronting the corrupt businessman who wants them dead. But he's not the only one on their tail.

Hard-nosed federal agent Luke Hobbs never misses his target. When he is assigned to track down Dom and Brian he and his strike team launch an all-out assault to capture them. But as his men tear through Brazil, Hobbs learns he can't separate the good guys from the bad. Now he must rely on his instincts to corner his prey...before someone else runs them down first.

FAST AND FURIOUS 6: When a Russian Military Convoy is taken down in Moscow, Agent Hobbs goes to the only man who can help him find his target - Dominic Toretto.

Toretto only agrees to help when he discovers Letty is alive and working with Hobbs' no.1 target - Owen Shaw a Special Ops mercenary running an equally brilliant crew.

Toretto's elite outfit including Brian O'Conner and all the Entire Original Crew pursue Shaw and his crew in a series of heart-stopping heists across Europe, each chase outgunning the other for size, scale and sheer excitement. 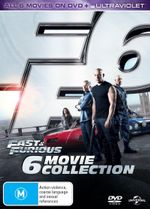