The Terminator:
In 2029, giant super-computers dominate the planet, hell bent on exterminating the human race! To destroy man's future by changing the past they send an indestructible cyborg - a Terminator - back in time to kill Sarah Connor (Linda Hamilton), the woman who's unborn son will become mankind's only hope. Arnold Schwarzenegger is perfectly cast as the fiercest and most relentless killing machine ever to threaten the survival of mankind! This fast paced, cleverly conceived adventure fires an arsenal of thrills, intriguing twists and heart-stopping suspense that never lets up for a minute.

Terminator 2 - Judgment Day:
In 'The Terminator', the Machines who rule the future sent an unstoppable machine to assassinate the yet unborn

John Connor - the future leader of the resistance. They Failed. In Terminator 2: Judgment Day, The Machines will try again. Sarah Connor and her now teenage son won't face the liquid metal T-1000 alone. The human resistance has sent back another warrior from the future to protect John Connor at any cost. Arnold Schwarzenegger is back as the cyborg from the future.

Terminator 3 - Rise of the Machines:
A decade has passed since John Connor helped Judgment Day and save mankind from mass destruction. Now, 25, Connor lives "off the grid"-no home, no credit cards, no cell phone and no job. Connor has no record of his existence. There is no way he can be traced by Skynet-the highly developed network of machines that once tried to kill him and wage war on humanity. Until, out of the shadows of the future steps the T-X, Skynet's most sophisticated cyborg killing machine yet. Sent back through time to complete the job left unfinished by her predecessor, namely the T-1000, the determined T-X is a machine that is as relentless, as is her human guise beautiful. Now Connor's only hope for survival is to annex with the Terminator, T-101, his mysterious former assassin. Together they must triumph over the technologically superior T-X and forestall the looming threat of Judgement Day-or face the apocalypse and the fall of civilization as we know it.

Terminator - Salvation:
Set in post-apocalyptic 2018, John Connor is the man fated to lead the human resistance against Skynet and its army of Terminators. But the future Connor was raised to believe in is altered in part by the appearance of Marcus Wright, a stranger whose last memory is of being on death row. Connor must decide whether Marcus has been sent from the future, or rescued from the past. As Skynet prepares its final onslaught, Connor and Marcus both embark on an odyssey that takes them into the heart of Skynet's operations, where they uncover the terrible secret behind the possible annihilation of mankind. 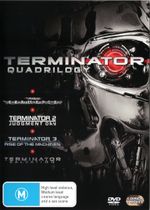