by Ralph Rugoff and Kristine Stiles

Paul McCarthy creates Disneyesque installations, sculptures of animal/vegetable/human hybrids and slapstick performances in a purge of a national subconscious.

The psycho-sexual desires and anxieties induced by the media and the built environment of contemporary America emerge in his collisions of plastic prosthetic limbs and condiments that stand in for bodily fluids.

These works have been variously deployed: through live actions, often documented on video, and more recently in outsized figures and artificial rural environments, combined in overtly sexual ways.

McCarthy's work echoes that of European artists such as Joseph Beuys or the Viennese Aktionistes, but gives 'action art' a postmodern twist.

Ralph Rugoff is the Director of the Hayward Gallery in London.

In 2005, he won the inaugural Ordway Prize in the category of arts writer and/or curator from the Penny McCall Foundation in New York.

Kristine Stiles is Professor of Art and Art History at Duke University, Durham, North Carolina, and has contributed to numerous books on contemporary art and performance, including Out of Actions: Between Performance and the Object (1997) and Theories and Documents of Contemporary Art: A Sourcebook of Artists’ Writings (2013).

Be the first to review Paul Mccarthy. 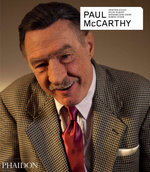 by Ralph Rugoff and Kristine Stiles