The Art of Dinosaur Designs

by Stephen Ormandy and Louise Olsen

From its humble beginnings as a stall at Sydney's Paddington Markets, Dinosaur Designs has become a beloved Australian brand that has attracted international acclaim.

This book celebrates the innovation and inspiration that have, over thirty years, produced a covetable body of homewares and jewellery.

As young art students Louise Olsen and Stephen Ormandy began selling resin jewellery with a stall at Sydney's Paddington markets. Today they have a business that employs 85 people and nine stores around the world including New York and London. Dinosaur Designs is the name of their jewellery and homewares company, admired around the world for its bold, colourful designs and unique fusion of art and design.

Almost every Dinosaur Designs piece is still handmade by artisans in its Sydney studio, because creativity remains at the core of what they do. Over 30 years since founding the business, Olsen and Ormandy are still going strong and their passion and creative flow is more exhilarating than ever. With this book Olsen and Ormandy open their hearts, minds and studio doors, to share their inspirations, ideas and process.

Louise Olsen and Stephen Ormandy met while studying at City Art Institute in the 1980s. Together with fellow student Liane Rossler, they started a stall at Sydney's Paddington Markets called Dinosaur Designs and enjoyed instant success when they began working with resin, which they pioneered as an art form.

Today, the business employs 85 people and there are nine stores around the world including Melbourne, New York, and London.

Louise Olsen is the daughter of well-known artists John Olsen and Valerie Strong, and Stephen Ormandy is also an artist in his own right.

Be the first to review The Art of Dinosaur Designs. 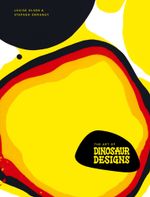 The Art of Dinosaur Designs

by Stephen Ormandy and Louise Olsen